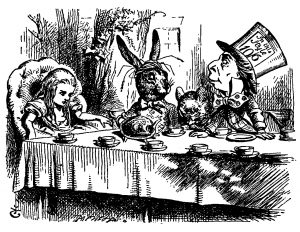 Purim 5779 was wild success! The Mad Hatter was the master of ceremonies, presiding over a crowd of congregants dressed as characters from Candyland, giant hoagies, Reepicheep from the Chronicles of Narnia, and everything in between.

The entertainment for our costume tea party was a Mad Lib Megillah reading in which words like “Pastry” or “Rainbow Brite” were substituted for the names of major characters in the book of Esther. It took a few minutes to realize that “Tube Sock” was standing in for Haman , the villain of the book of Esther who deserves a hearty “Boooooo!”

No tea party would be complete without a tray of biscuits (or cookies as they are called on this side of the pond). We had an exotic array of hamantaschen, the traditional Purim cookies, with flavors from mango to cannoli! Before everyone left, they got photos in front of the giant flower and mushroom backdrop. It’s another one for the books!

One thought on “A Mad Mad Purim!”