The following events and classes require registration.
Please click on the name of the event to register.

We hold weekly Shabbat services on Saturday at 10am.
For more information about our services, see the Visitors tab. 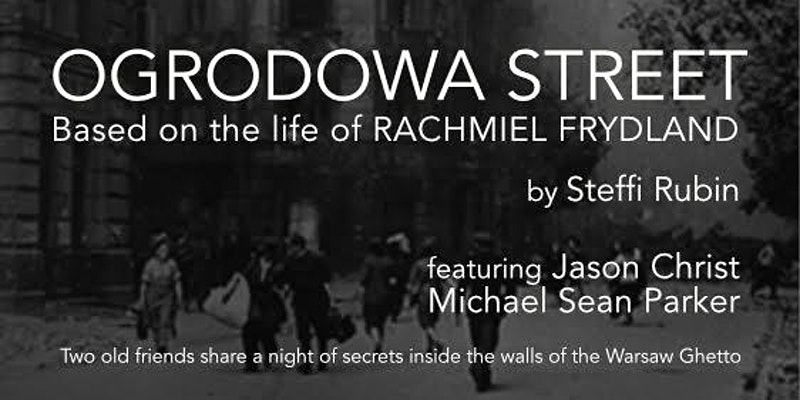 OGRODOWA STREET, a story of life and death in one act.

Twenty-four-year-old Rachmiel Frydland smuggles himself into the Warsaw Ghetto, with just one thought: to die—an “achievement” that has eluded him through four years of Nazi occupation in Poland. The young Jewish Yeshiva dropout, who had disappointed everyone by becoming a Christian, is now plagued by this new failure—the simplest of goals in the cruelest of times, and a fate which everyone in his family has already met. Here in the ghetto, he runs into an old friend who insists that Rachmiel smuggle himself back out and escape death once more. The two spend the night laughing, arguing, remembering and struggling over Rachmiel’s worst fear: that he alone has been “condemned to live.”

Actors Jason Christ (Rachmiel Frydland) and Michael Sean Parker (Stasiek Eisenberg) bring us back to a time and place when life and death were close companions in Steffi Rubin’s drama based on the early life of Rachmiel Frydland. As the two friends wait for the sun to rise, honesty is at a premium, faith is hard to muster, and Rachmiel’s decision can no longer be avoided.

Four performances to choose from:
Saturday, November 27, and *December 4 at 7:30 PM.
Sunday, November 28 and December 5, at 6 PM.
Please note that the starting times are different.

Seating is limited. Masks are Optional.

If you would like to make a donation, you can do so at https://messianicliterature.org/donate/